To the history of the Collie in Switzerland

On December 28th, 1902, the Swiss Collie Club was founded in Basel as a secondary section to the already existing parent Continental Collie Club. The first registration in the SHSB (the Swiss pedigree book for dogs), however, took place back in the year 1889, it was the tri-coloured male called “Dash”, imported by Max Feer, then president of the Continental Collie Club. Max Feer was also appointed president of the Swiss Cynological Society SCS (Swiss Kennel Club) during the early years and later became the first honorary member of the SCS. 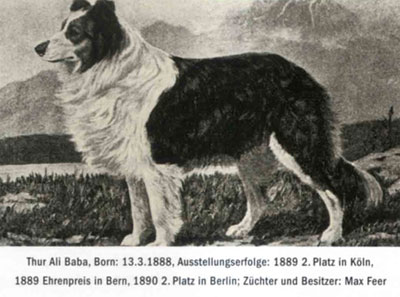 Max Feer had his first success on exhibitions with his male “Thur Ali Baba”, which he had bred himself. The dog was born March 13th, 1888, and was awarded second prize on the exhibition in Cologne in 1889, honorary prize in 1889 in Berne and 2nd prize in Berlin in 1890. Another one of Max Feer’s dogs, which he had bred himself and which proved to be successful as a breeding dog and during shows, was the female “Thur Fantasy”. 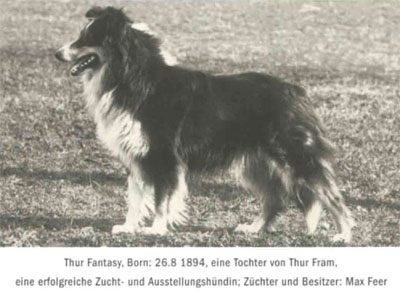 In 1931 eight longhaired Rough collies were shown on the IHA in Geneva as well as four longhaired Rough and three shorthaired dogs on the NHA in Solothurn. Colonel Lutz, then president of the Swiss Collie Club, had imported the three shorthaired collies “Laund Lawful”, “Laund Lowe” and “Laund Larle”, all brothers and sisters from one litter, from the famous kennel “Laund” from Mr. M. M. Standsfield. 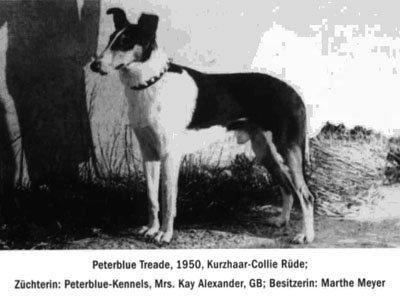 About 1000 collies were registered in the SHBS up to the year 1949, that is within 60 years after the first registration. During the booming years 1972 and 1973 as many as 524 and 550 collies respectively were listed. For more than 100 years again and again collies were imported from England for breeding in Switzerland. Thanks to their good quality renowned kennels such as

etc. were turned to. Right after the 2nd world war Switzerland, too, was, thanks to its possibilities, asked to export dogs by various countries in Europe. Nowadays valuable and excellent breeding animals are imported from almost all European countries.

the Shetland Sheepdog breeding (Sheltie) until 1954,

and the Border-Collie breeding until 1985.

In 1973 a group of 51 people founded the “Groupe Romand”, an section of the Swiss Collie-Club, for the French part of Switzerland.

Dog breeding has always and will always have its ups and downs. The Swiss Collie-Club decided to have the nature and character of the dogs tested on a voluntary basis under peaceful circumstances. The test became obligatory for all short- as well as longhaired collies in 1990. As for hygienic measures, since 1994 an HD test as well as CEA and PRA tests have become compulsory. Since our capable comrade and family dog nowadays practically never guards sheep anymore, it is our duty to see to it that in our highly technical world with its constant noise, the hectic life and all the stress, which we ourselves cause, and in spite of all the strains, the collie may lead a normal life, appropriate to its dog’s nature. Today it is us, the family, that is the measure of many things for the collie, and there are many various possibilities for playing and sports such as rule, agility, etc, where it can romp about. Today, it is our responsibility to make good use of our time and create such surroundings for our dogs that in the future we will find it worthwhile to think back of the past.